Christmas gifts come in all shapes and sizes. For James (Luke Treadaway), a struggling street musician, a very special one arrives in the form of Bob, a strong-willed stray cat who wanders into James’s tiny flat. Bob enriches James’s life, giving him companionship, purpose, and a large, new audience. When Animal Welfare officers threaten to take Bob, the local community rallies to help James and Bob — sparking a journey that takes the pair to places they never imagined in this heartwarming, spirit-lifting movie for the whole family.

KIDS FIRST! Film Critic Carlee S., comments, “A Gift From Bob is a holiday story with a touching message and a loveable cat named Bob. The film shows how a musician and a cat come together and form a bond that touches everyone around them. It’s based on a true story and is an uplifting reminder of the true spirit of Christmas.” See her full review below.

A Gift From Bob 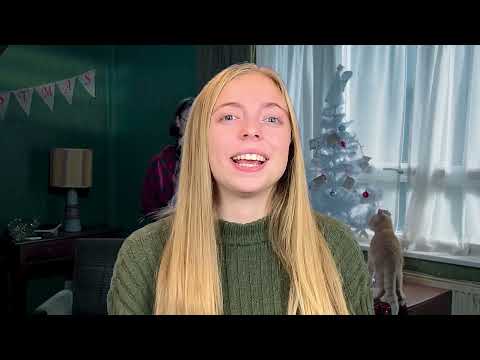 A Gift From Bob is a holiday story with a touching message and a loveable cat named Bob. The film shows how a musician and a cat come together and form a bond that touches everyone around them. It’s based on a true story and is an uplifting reminder of the true spirit of Christmas.

This movie begins with the main character, James Bowen (Luke Treadaway) at a party. He has published a successful book about his cat Bob and is struggling with an idea for his next book. When he walks outside with his cat, he sees a young man being accosted and he intervenes. He learns the young man is homeless and decides to tell him about his past struggles. The majority of the film centers on this flashback.  Life has not been easy for James. He has experienced many misfortunes and he struggles to make ends meet as he tries to escape his past and care of Bob. Throughout the film, James meets a lot of people along the way, including Bea (Kristina Tonteri-Young) and Moody (Phaldut Sharma) who are willing to help him. He also meets people who are trying to take away the one thing he loves most. He must try to figure out his path in life and what is best for Bob.

My favorite scene is when James is dealing with a tough dilemma and suddenly, all the people of the city gather around him with gifts. This display of affection shows how much they all care for Bob and that they all agree James and Bob are perfect for each other. His friend Moody tells him some stories which are inspirational and interesting to hear; they also add to the message of the film. The setting is perfect for Christmas with the city decorated in lights and Christmas trees and, even Bob wears a holiday outfit. I also like how James’ apartment changes to reflect what is happening in his life. It is a big contrast from the beginning to the end. The music in the film is enjoyable. I particularly like how James turns a traditional Christmas song into one about his cat.

The message in this film is that treating others with kindness is a gift that gives back. The film captures the essence of Christmas by showing how gifts of kindness are more powerful than material gifts. The bond James creates with his cat and those in his community help give him the strength and encouragement he need. The only warning I have are the references to drugs that occur a few times in the film, plus some mild violence.