Modern families are where it’s at these days. The Pew Research Center tells us that 40 percent of U.S. families feature at least one partner who has a child from a previous relationship. Stepfamilies were a novelty back in the mid-70s when my widowed dad married my stepmother. Now, a blended home is the norm.

Yes, a lot has changed and stepfamilies are more common — but that doesn’t mean the experience of merging families has gotten any easier for kids. Think of it as a playwright or director bringing two separate casts of characters together to form one unit. It’s a tall order, and I wish my own parents had realized this. My memoir, The Art of Reassembly, is a snapshot of a hard and confusing time.

There’s no one right script for success when blending a family. The process is largely improvisational. In fact, stepparents should absolutely take cues from improv performers. Both improv and stepparenting are live, with dialogue, plot and characters developing in the moment — often prompted by input from the audience. In both scenarios you must be motivated, adaptable and creative. With this approach in mind, here are my five tips for nurturing a healthy stepfamily.

Loss: The Elephant in Every Room

Sure, marriage is a joyful celebration, and you have every right to be excited about your new life. But, when it comes to forming a stepfamily, a major loss will always lurk somewhere in the background, just out of sight but never out of mind. My dad presented his remarriage as a brand new beginning with a new mother. He effectively put the past behind us. As a child, I had no choice but to accept this version of what was happening. Much later, though, in adulthood, I felt sad and angry at my dad and stepmother for having erased my mom in this way.

It’s even trickier for children of divorce. Navigating relationships is even more complex when the other parent is still living. Depending on the age of a child, the memory of the former marriage might still be vivid. Accepting the fact that loss will be in some way foundational to your new family creates a realistic mindset.

Give Space and Allow Conflict

It’s going to happen. There will be rifts. Clashes occur any time two groups of people with different traditions, habits and schedules come together. These changes are hard for anyone, but especially so for kids. Look for signs. They might come in the form of outbursts and resistance, or more subtle reactions. When I was growing up, it was hard to express difficult emotions. I resented additional chores my stepmother assigned, and when she began using items that had once belonged in my room, I stiffened with unspoken pain. How it would have helped if I had had an open invitation to talk about how things were going! Let your kids know they can talk about it, whatever it is!

Stepfamily trees are a widening web of relationships. After my dad remarried, we still saw my mom’s relatives but not as often as we had before she died, and seldom all together. There were solo gatherings with my maternal grandparents at Christmas. I wish now that my siblings and I could have spent more time with our cousins, even if my dad had not attended. Such issues of loyalty are more pronounced in divorce situations. Ask your children what they want and respect their wishes.

As divorce became part of our family in my generation, I wanted to balance inclusion with respect for separate identities. When my stepmother asked me if she should include my brother’s new teenage stepson in her cash gifts at Christmas, I said “yes” right away. Since he was choosing to be with us for the holiday, treat him like everyone else.

Don’t allow the past to prevent your blended family from growing together. The key is to let it happen in its own time, rather than forcing anything. Find joy in the little things! I have fond memories of baking cookies with my stepmother, shopping for school clothes together, and going on excursions with her and my younger brother. On our birthdays, we chose the dinner menu and type of cake. These mundane rituals, repeated over the years, created a familiar and reassuring pattern that I enjoyed.

Remember, it’s all happening in the moment and your family are the star players. Actor and comedian Tina Fey wrote in her book, Bossypants, regarding improv: “There are no mistakes, only opportunities.” On the stage, what could be called a mistake might send the story in an interesting, unexpected direction or result in hilarity for the audience. It’s often the same in stepfamily interactions. Accept vulnerability and imperfection in your new family. Extend grace to others, and to yourself. This is the healthiest example you can set for children in any kind of family. 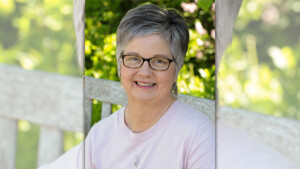 Peg Conway writes and practices Healing Touch energy therapy in Cincinnati, OH, where she also volunteers at a children’s grief center. Her essays about early mother loss and long-term grieving have appeared at Austin Fit Magazine, The Manifest-Station, the Cincinnati Enquirer, and The Mighty. After earning a master’s in journalism, she worked in corporate communications. Later, she became a certified childbirth educator and doula. Peg and her husband have three grown children and one grandchild. Follow her on Facebook or Instagram.