In DC League of Super-Pets, Krypto the Super-Dog and Superman are inseparable best friends, sharing the same superpowers and fighting crime in Metropolis side by side. When Superman and the rest of the Justice League are kidnapped, Krypto must convince a rag-tag shelter pack—Ace the hound, PB the potbellied pig, Merton the turtle and Chip the squirrel—to master their own newfound powers and help him rescue the superheroes. Dwayne Johnson stars as the voice of Krypto the Super-Dog in Warner Bros. Pictures’ animated action-adventure feature film “DC League of Super-Pets,” from director Jared Stern. The film also stars the voices of Kevin Hart, Kate McKinnon, and John Krasinski. 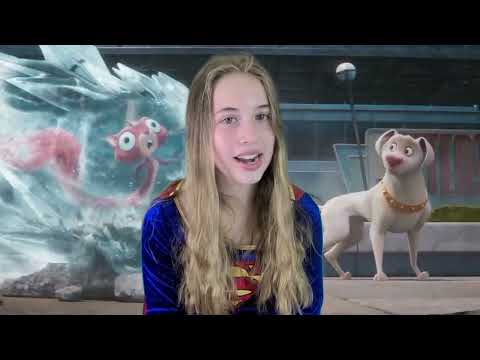 DC League of Super-Pets is not only “dog-tastic,” it’s “fun-tastic” as well!  I can’t remember watching another movie with so much spontaneous laughter and applause from a screening audience. This animated story will be one your family will want to watch again and again.

In DC League of Super-Pets, Krypto the Super-Dog (Dwayne Johnson) and Superman (John Krasinski) are inseparable best friends, sharing the same superpowers and fighting crime in Metropolis. When Superman and the rest of the Justice League are kidnapped, Krypto must convince an unlikely group of animal shelter heroes that they need to band together to help him rescue their human superhero counterparts. The movie trailer for DC League of Super-Pets gives audiences an accurate portrayal of the movie, in this rare instance, as well as interesting glimpses of the delightful characters and humorous situations which develop.

Our new heroes come to life in this animated action adventure film from Director Jared Stern who is also one of the writers. The cast is notably talented and Krypto’s other canine member Ace (Kevin Hart) teaches him that love is unconditional and that you can’t have justice without truth. This movie really has a fabulous ensemble cast and there are too many individuals to mention, and they all contribute to the hilarity of this story. Like the many pets they portray, the characters are fun, loyal and show us that we all need a best friend. My favorite scene is one where Krypto is jealous and gets up to some serious antics when he is home alone. It’s set to the song “Bad Blood” by Taylor Swift, which plays in the background when he indulges his feelings. Dwayne Johnson really brings his character to life and writers Jared Stern and John Whittington must have pets at home, as they capture the canine spirit perfectly. There is also the competitiveness between Batman and Superman, which underlies some of the humorous scenes and interaction.

The message of this film is that love is unconditional, even if it hurts. Krypto and his alter-ego, Bark Kent, are jealous of Lois Lane (Olivia Wilde). He learns that change and accepting new friends can expand the possibilities of love. Before the movie starts there is a segment about Best Friends Animal Society (bestfriends.org) and how you can become a superhero to homeless pets. As a person who has adopted two homeless pets, I can’t tell you how meaningful it is for DC Super League of Pets to recognize the love that these animals can bring into our lives just as Krypto experiences in the film!

I give DC League of Super-Pets, 5 out of 5 stars and recommend it for ages 5 to 18, but of course adults will enjoy the humor and storyline as well.  It is available in theaters July 29, 2022, so don’t miss this tail-wagging adventure!