This summer, experience the epic conclusion to the Jurassic era as two generations unite for the first time. Chris Pratt and Bryce Dallas Howard are joined by Oscar®-winner Laura Dern, Jeff Goldblum and Sam Neill in Jurassic World Dominion, a bold, timely and breathtaking new adventure that spans the globe. From Jurassic World architect and director Colin Trevorrow, Dominion takes place four years after Isla Nublar has been destroyed. Dinosaurs now live–and hunt–alongside humans all over the world. This fragile balance will reshape the future and determine, once and for all, whether human beings are to remain the apex predators on a planet they now share with history’s most fearsome creatures.

KIDS FIRST! Film Critic Ethan P. comments, “Jurassic World Dominion is an action-packed film filled with great comedy and strong actor performances. I also liked how they brought characters from Jurassic Park and World together into one movie.” Tiana S. adds,” Bigger and scarier dinosaurs, heart-pounding sound effects, and plot twists mixed with plenty of adventures are just what you can expect from Jurassic World Dominion! From the beginning to the end of the movie, there are tons of action-packed scenes to keep you literally jumping for more.” Benjamin P. wraps it up with, “The world of Jurassic Park roars back to life with Jurassic World Dominion, a long, spectacle-driven, dino-filled movie  — at times messy and confusing and good reminder of how this film doesn’t quite live up to Jurassic films of the past.” See their full reviews below. 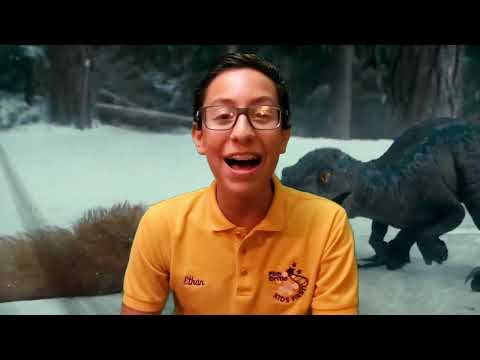 Jurassic World Dominion is an action-packed film filled with great comedy and strong actor performances. I also liked how they brought characters from Jurassic Park and World together into one movie. In this version, humans and all animals learn to adapt to sharing the planet with all species of dinosaurs.

Continuing from the Jurassic Park, and now World series, this movie is about how Dr. Henry Wu (BD Wong) makes a huge mistake when he and Lewis Dodgson (Campbell Scott) of Biosyn, try to engineer locust bugs designed to eat all the wheat crops, except for Biosyn crops, so they can control the food source. The problem is these giant bugs multiply out of control and threaten to eat all the human’s source of food. You might remember Dodgson from the first Jurassic Park movie, where he was trying to buy dinosaur embryos from an Ingen programmer named Dennis Nedry. The famous Barbasol can with a secret embryo compartment makes a cameo in this film as well. Ellie Sattler (Laura Dern) and Alan Grant (Sam Neill) work together again to stop this madness by exposing their plan. While this is happening, Maisie Lockwood (Isabella Sermon) is being hunted down to be studied at the same lab.

The graphics are exciting and just as good as the CGI. My favorite part is when Dr. Ian Malcom (Jeff Goldblum) throws a stick on fire at the T-rex to stop it from eating him. The scene is so realistic and is even better when he starts blowing out fire from his mouth! In comparison with the previous Jurassic Park movies, this film has extraordinary effects. The music is appealing for each scene and the story line is engaging, even though it was a bit predictable. The actors performed their characters very well.

The moral of Jurassic World Dominion is to respect nature and to adapt to changes—we see that message where InGen and Biosyn took dinosaurs for granted when using them to experiment and to try to make money.