More Than Just the Baby Blues

The birth of a baby is one of the – if not the most – exciting and emotional days in the lives of any couple. But for new moms (and sometimes even new fathers), the birth of the baby can result in a rather unexpected problem: depression.

More specifically, postpartum depression. While often referred to as the “baby blues,” postpartum depression is different in that it doesn’t go away after a few days and is actually a serious illness. A study by the Centers for Disease Control and Prevention (CDC) reveals that approximately one out of every eight women in the United States experience postpartum depression. In some states, it’s as high as one in five women, the CDC notes.

It’s an issue Calera resident Amanda Dodson Gremillion knows all too well. She experienced postpartum depression after the birth of her daughter, Aubrie. “I didn’t realize anything was wrong for a while,” Gremillion says. “I had heard about the ‘baby blues,’ and I tried to tell myself that’s all it was, but it just never went away. I was trying so hard to hide it, but I just knew I was really unhappy. I didn’t like being a mom, and I was ashamed of it.”

In addition to dealing with the emotions of being a new mother, Gremillion was also dealing with other stresses: two family members passed away and she got laid off from her job. The combination of it all, in addition to her existing issues of obsessive-compulsive disorder (OCD) and anxiety, culminated in a battle with postpartum depression. “Things just continued to get worse and worse, and I eventually realized it was more serious than the baby blues,” she says. “It was overwhelming.”

After a nearly two-year struggle – which almost led to the end of her marriage – Gremillion reached out for help. When she finally started the recovery process, she began journaling. “That really helped me see what was wrong and how I got to be where I was,” she adds. That journaling eventually turned into blogging. While at first her blog posts were only seen by friends and family, she eventually decided to share it more publicly. “I began hearing from so many others saying how it was helping them and making a difference for them,” she adds. “That meant a lot to me, and I knew I could do more.”

That’s when Gremillion got another idea: she began writing a book about her experience with postpartum depression, as well as OCD and anxiety. “I wanted other people to seek help and know that they are not alone,” she says. “The fear of what others will think is a big reason a lot of people don’t get help sooner. They are scared to tell anyone and they feel ashamed of their thoughts, even if they cannot help it and do not act on them.”

Her book was first published in 2012, but she recently updated and re-published it. The new title of the book, Just Buy Her A Dress and She’ll Be Fine, is based on a comment she once heard that stuck with her. “Someone made a comment to me once about buying someone a dress after they had a baby so they would not get postpartum depression,” she explains. 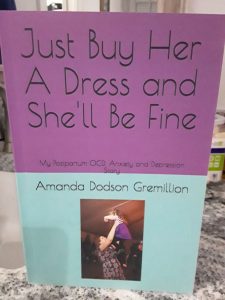 Gremillion says an important aspect of the book is incorporating humor wherever possible, as she finds that the serious topic of postpartum depression is often too depressing for people. “A lot of people don’t want to talk about it because it is depressing,” she says. “Learning to laugh about everything again was another step in healing for me, so I tried to add a little humor to lighten it up and make postpartum easier to talk about.”

Whether others can enjoy the humor or relate to her struggles, Gremillion’s goal with the book is simple: to show others they aren’t alone and encourage them to get help. “Postpartum depression happens to so many people,” she says. “My family and I didn’t know anything about it before it happened to me. We were clueless, and we’ve learned so much going through it. It’s important for people to know that everyone goes through hard times, but you can get through it.”

Paige Townley is a freelance writer. Gremillion’s book, Just Buy Her A Dress and She’ll Be Fine can be purchased through Gremillion’s website, justbuyheradress.com.