Invincible! is available for pre-order now, and the whole album will arrive on August 14.

Now more than ever, kids need to find the power to deal with life’s challenges. We may all be looking for a superhero to save the day, but Roger Day reminds us that our true power lies within.

Day, the (normally) nationally touring and multiple award-winning Nashville-based singer-songwriter, will release an album to help youngsters “solve the problem” and “save the day” using their own imagination and skills – no imaginary superheroes needed. Featuring 10 original songs Invincible! is available for pre-order now, and the whole album will arrive on August 14. Visit www.RogerDay.com for the latest information. 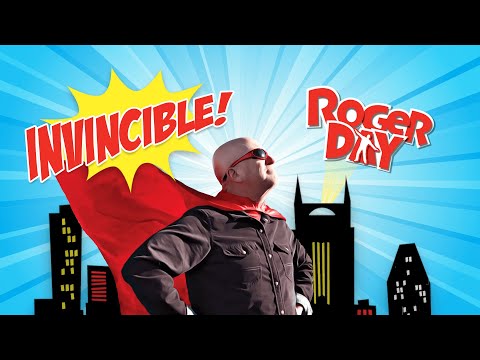 From the rousing beat of the title track, we know we’ll be ready to fend off any evil foes. “No need to wait for superheroes anymore. I can save the day through the turning of the page.” As Roger says, “every puzzle is solve-able” through creative brainpower and by consulting “the pages of a book.” Any kid can discover that they are capable of working through a problem, like “No Ordinary Super Hero.” They may even find themselves declaring to their parents: “I’ll Be Your Super Hero” as they soar confidently in their cape and boots.

The rockin’ beat continues with the advice to superheroes to “Get a Robot First” and the shifting perspectives of “Little Ants,” and the rousing “Me and My Jet Pack,” which has been a hit with the kids at Roger’s concerts. Of course, not all heroes fly around on capes and fight bad guys. “The Everyday Super Hero Song” celebrates the ordinary people who keep us educated, safe and healthy. The album ends sweetly with the soft-rock, Beatles-inflected ballad “Love Is My Super Power,” in which the whole world can “shine like new.”

Roger Day is based in Nashville and usually performs for families around the United States. His appearances have included the Los Angeles Times Festival of Books, the Bay Street Theater in Sag Harbor NY, The Charlotte Children’s Theater and many schools, libraries and festivals. Roger Day’s songs have been featured on Radio Disney, SiriusXM Satellite Radio, and public television. His five studio albums – Rock ‘n’ Roll Rodeo, Ready To Fly, Dream Big!, Why Does Gray Matter? and the CD/DVD release, Marsh Mud Madness– along with two Greatest Hits albums – have all won Parents’ Choice Awards and critical acclaim nationwide. During spring 2020, he launched a virtual “Dream Big” and “Virtual Zoo” concert series, drawing thousands of fans.