How parents can help their teens navigate body image in a social media-driven world.

Social media has changed practically everything in today’s world, and as its usage has continued to explode, so has many serious issues with adolescents.

For example, social media usage has significantly impacted body image issues, and the statistics on the impact are quite shocking. More than 80 percent of 10-year-olds are afraid of being fat. Approximately 53 percent of 13-year-olds are unhappy with their bodies, and this number increases to nearly 80 percent by the time girls turn 17.

“There’s so much body comparison across the board,” says Dr. Rebekah Savage, who works in Children’s of Alabama’s Adolescent Medicine Clinic. “All of us struggle to not compare ourselves to others as we’re constantly looking through Instagram. Think about how youth are so much more easily influenced by friend groups and social media.”

While the issue may predominantly affect females, males aren’t left out of the dysfunctional equation, and parents of all adolescents are often left unsure of how to help their children battle these body image issues. Thankfully, there are many considerations and tips that parents can apply to everyday life that can help prevent body image issues from arising. 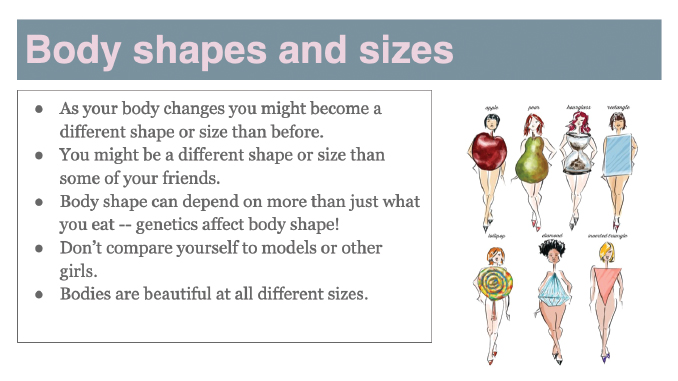 Different is Normal. An important part of the puberty process for parents to talk to their kids about is that preteens go through changes at different times. There’s no one-size-fits-all approach when it comes to puberty. “It doesn’t all happen at the same time for everybody,” stresses Dr. Erin Hall-Minnie, an OB/GYN at Brookwood Baptist Medical Center. “Every person has a different time frame and rate of development from their friends or what they see on social media. Different is normal, and kids should be taught to understand that.”

Get Physically Active Early. Physical activity is positive for kids for many reasons, from learning teamwork and responsibility to simply developing healthy habits. Participating in sports or other physical activities helps increase their self-esteem, and parents should consider getting their kids involved in activities from an early age. “Activities are a great way for kids to express themselves and their interests, not to mention helping develop so many skills,” adds Dr. Heather Deisher of Brookwood Baptist Medical Center. “When they have an activity they enjoy, it helps them develop good self-esteem and body image as they develop.”

Watch Your Mouth. Parents are the first and biggest role models for their children, so it should come as no surprise that what they say about their bodies – and the bodies of others – matters. “It’s important for parents to try to not use negative words to describe their own bodies and avoiding criticizing the physical appearance of others, or even comparing the physical appearance of others, in front of their children,” Hall-Minnie says. “Teens will model their own body image after the people around them, so parents have a big role to play there in setting the right example.”

Savage echoes the importance of parents watching their language about weight and body issues because it can be so easily to overlook. “It’s not uncommon to hear parents tease themselves about their own bodies or make little comments about what they have eaten or how they don’t like how they look,” she says. “You can make comments like that thinking it’s no big deal, but kids pay attention and then it becomes the way they look at and talk about body issues.”

Reframe the Thought Process. Instead of keeping the focus on weight and numbers on a scale, Savage says, change the verbal framework altogether and make the focus about nutrition and being healthy. “Maybe someone is overweight or obese but frame the conversation in a context of health and nutrition and not weight,” Savage adds. “Talking about ways to create healthier habits and what nutrition should look like is much more helpful. Don’t frame conversation in the context of diets and weight.”

Reinforce Important Traits. It’s normal for anyone to put too much thought into what they look like – especially teen or preteen females – but parents can help them refocus to other more important traits by focusing more on it themselves. “We need to normalize other types of compliments we give children from an early age that have nothing to do with their appearance,” Deisher says. “That can have a really big impact on a child as they grow up.”

Instead of focusing on “how cute” or “pretty” the girl is or “how strong” the boy is, for example, other areas, such as their skills with an activity they participate in or how great they are with a particular subject at school. “Body concerns and body images are a normal part of adolescent development, but parents have to listen and be ready to give positive feedback about their child that isn’t aesthetic-related encouragement,” Savage adds.

Eat Together. Believe it or not, simply sitting down together to eat is a positive step parents can take to encourage positive food and body image issues. Plan at least one mealtime a day to sit down together as a family. “Studies have shown that young people who had regular family meals have helped improve diet qualities and eating disorder behaviors,” Savage explains. 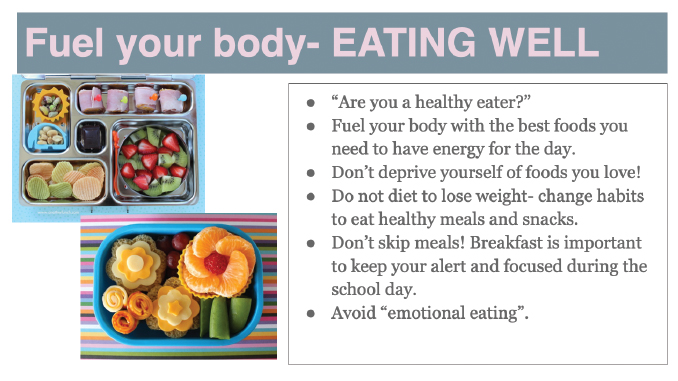 Explain the Reality. It may sound overly simple, but having the conversation with an adolescent about social media and the many negatives that come along with it is important. “It can’t be assumed that a teen or preteen understands that photos are often doctored or that the photo they are looking at is of an adult model, not another teen,” Hall-Minnie says.

Parents should also check in and monitor who their child is following on social media consistently to ensure that unrealistic expectations aren’t being encouraged to their child. “There should be clear expectations from the very beginning when a parent allows their child to start using social media,” explains Savage. “From the very beginning when you hand them the cell phone, make sure they know you are in charge of the phone and will regularly monitor the content and who they are following. Then if you do see concerning images or groups or that they are following people they shouldn’t, you can pick up on warning signs earlier rather than later.”

Know the Warning Signs. Though prevention is certainly the goal, for many teens body image issues are a reality, so it’s important for parents to know the warning signs of potentially serious problems. There are quite a few warning signs to look for. Some of those signs are in how they talk – specifically if they are using negative words to describe their body. It should also be noticed if an adolescent becomes obsessed with his or her appearance – whether it’s never being satisfied, always trying to improve how they look, or weighing themselves a lot. Parents should also take note if their child drastically changes their eating habits, start binge eating, or skipping meals. Like with eating habits changing, parents should also pay attention for physical activity levels changing. “Whether it be the child not being active enough or starting to exercise excessively or compulsively, it’s concerning,” adds Hall-Minnie. “Mood changes, social isolation and even feelings of guilt can be signs as well.”

Good Vibes Only. Parents should always make sure to keep the lines of communication open with their child, ask questions as much as possible, and even more importantly, always listen to what the child is saying. It’s important that parents acknowledge their feelings and make sure they know it’s OK to ask for help or guidance. “Be as open and non-judgmental as you can,” Savage says. “Try not to overreact to what they say. Ask open-ended questions and then just listen. See if they will open up. Make sure they know you are there to walk with them through it and encourage them that what’s important is that they are healthy and happy.”

Don’t Avoid It. Body image problems can be an incredibly difficult conversation for parents, but it’s one that must be had, especially if the parent recognizes potential warning signs. “We are in a battle of social media versus truth, and parents must stay in touch with their kids about it,” Savage says. “Don’t let the topic come up and then drop it and never go back to it.”

Part of tackling the potential problem head on is not ignoring the gut feeling that something is wrong. Oftentimes the parent’s intuition is right, and the sooner action is taken, the better. “Teens certainly have to come to a peace and understanding with their looks, but if a parent sees something taking up more of their time and thoughts and it’s affecting what they are eating or leading to weight loss, it’s a sign you need to get some help,” adds Savage. “Talk to the pediatrician or a counselor. Getting ahead of it as much as possible is important.”